In a vase on Monday: Candy Stripe 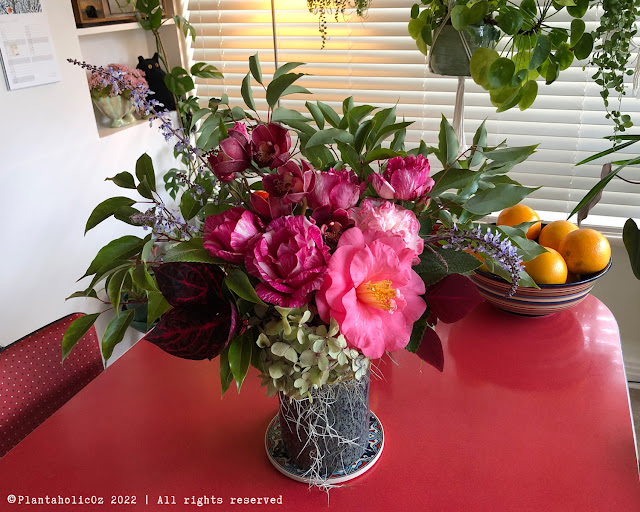 Being winter here in Australia, it's nearly time to prune the roses (I normally do this in July). Despite the impending chop, one of my favorite roses, 'Candy Stripe' is still putting on a lovely display of blooms. 'Candy Stripe' is a tall, vigorous rose, growing to about 6 feet tall. It puts up with a lot; it's planted in heavy clay soil and each year it gets overrun by the giant Mexican tree daisy growing nearby. I've never seen even a hint of black spot on the leaves and the plant is rarely without flowers. Perhaps this rose's only downfall is its very faint perfume. I'm willing to forgive this for all its other positive attributes.  Placed in the vase alongside 'Candy Stripe' is the spike of an unknown dark red Cymbidium sp. Usually I don't pick orchids, preferring to bring them inside in their pots to enjoy their blooms. However, this one was a lost in its pot and a little snail munched, so I thought it would be better apprecia
16 comments
Read more

In a vase on Monday: simple, sweet and succulent 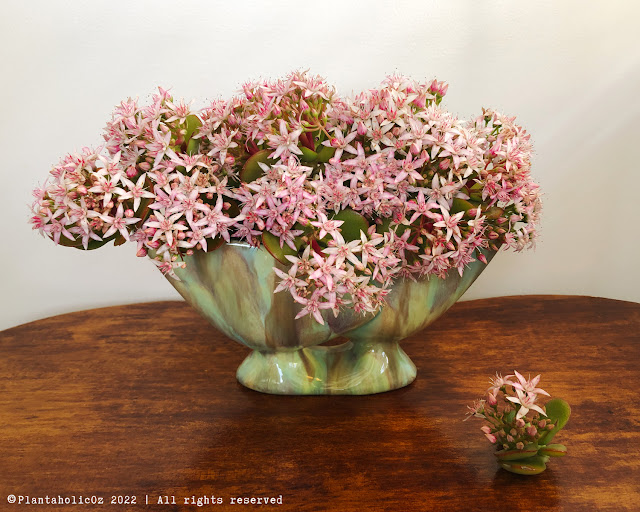 The stand-out plant in our garden this week has got to be good old Crassula ovata . Our specimen is seriously old: it has a trunk like a tree and stands at least six feet tall. I didn't originally set out to create an arrangement featuring only one type of flower, but once I had slotted these blooms into place, I thought that adding anything further would detract from their sweet simplicity. The vase has been passed down through my family - I believe it belonged to my Nana. To be honest, I'd always been kind of miffed as to what sort of arrangement would work in it, but I think this does the trick.  I think the individual flowers are really quite amazing when viewed close-up. Perfect little stars. The vase/arrangement also works in well with our retro-themed kitchen. Our Crassula ovata is a beast of a thing. I wish I got a picture of the trunk - it's thicker than a man's thigh! Looking all starry in the last of the afternoon sun Cathy over at Rambling in the Garden
14 comments
Read more

The other Cousin It 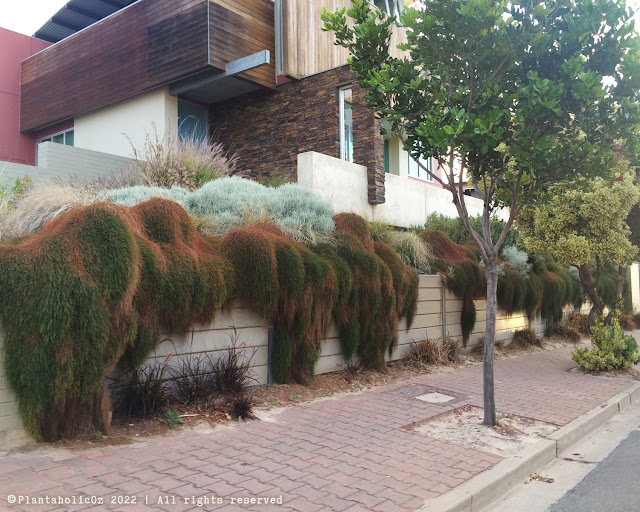 I love walking - not specifically for the exercise (although of course, that's a bonus) but rather to have a good stickybeak at other people's gardens. If the gardener is present, that's even better. We might have a chat and perhaps I'll score a cutting or three (either that or perhaps they think I'm some sort of loitering neighbourhood weirdo ;) Occasionally, I get lucky and stumble upon a jaw-dropping garden I haven't encountered before. This was one such garden, seen on a beachside walk, far away from where I live: The amazing cascading bronze-tinged foliage plant is Casuarina glauca 'Cousin It' (not to be confused with Acacia cognata 'Mini Cog' - sold under the name 'Cousin Itt' in the US). The silver plant behind is cushion bush Leucophyta brownii . Purple fountain grass, Pennisetum advena 'Rubrum' is planted at the bottom of the retaining wall, with our Australian native tuckeroo Cupaniopsis anarcardiodes and variegat
4 comments
Read more
More posts