In a vase on Monday: pickin' in the rain

I'm sneaking in late again this week as we're just back from our trip to Ikara-Flinders Ranges National Park. Well...sort of...

We knew there had been significant rain in the area and that access to some areas of the park might be difficult, however when we arrived, we found that most of the roads were closed. Undeterred, we decided to check out Rawnsley Park Station instead, which is located just before the entrance to the park, overlooking Wilpena Pound. It's a fabulous spot, with beautiful views and good facilities. We had been prepared to 'rought it', so having access to a hot shower felt very luxurious! The main downside, however is that as this area has been pretty extensively grazed, so we didn't get to see the wildflowers were hoping for.

We returned home to a garden drenched by rain and with many plants in full spring bloom, including this gorgeous Leucospermum reflexum hybrid 'So Exquisite'. The 'Camp David' roses were also flowering, their blooms so heavy under the weight of the rain that they were flopping. I decided to cut a few for my vase, along with shrimp plant Justicia brandegeeana and foliage from Japanese flowering quince Chaenomeles speciosa, Spiraea cantoniensis and Plectranthus argentatus. 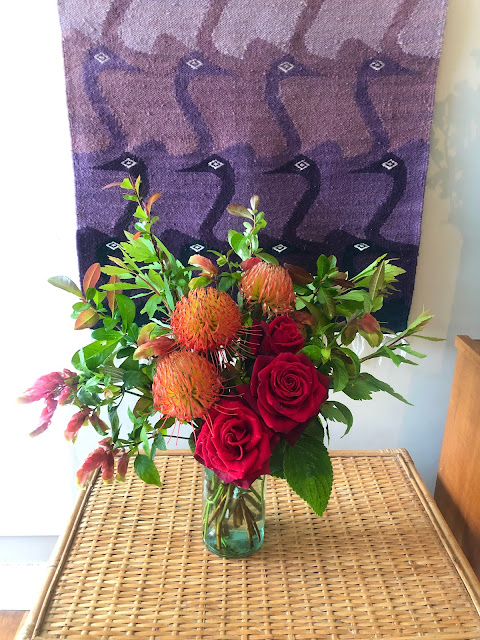 Thanks as always to Cathy of Rambling in the Garden, for hosting the In a Vase on Monday meme. Perhaps you have a bunch from your own garden you would like to share too?

Here are a few pics of the landscapes around Rawnsley Park Station, for those interested.

Despite not gaining access to the National Park itself, we still has a great time. It was so wonderful to disconnect and get away.

Popular posts from this blog

Gardening on one leg: what breaking my ankle taught me about my garden 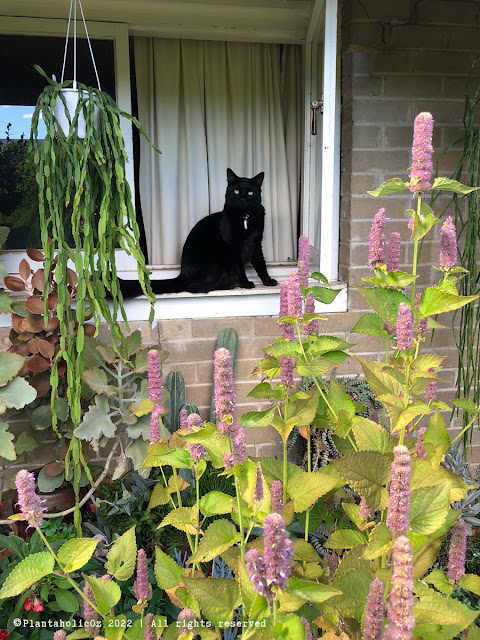 Until recently, an average day for me began with an early morning stroll through my garden, cup of tea in hand and Cosmo the cat weaving in and around my legs as we conduct our morning garden inspections together. Then I’d head out to garden for clients, or up to the nursery where I work part time. On days off, I’d usually be found pottering around my own garden.  Cosmo keeps an eye on the Agastache foeniculum Then I broke my ankle and all garden activities came to a grinding halt. The injury was a silly one; I inelegantly tripped on a door snake in our hallway, twisting and falling awkwardly. X-rays revealed the need for surgery and the installation of some gnarly metal hardware with a long period of recovery downtime. This was not the news this gardener wanted to hear! Ankle surgery and gardening don't mix   Not being able to garden has been interesting. My immediate thought, when the accident first happened was... ‘how on earth am I going to water my (600+) pot plants*!?’  My o
Read more

In a vase on Monday: just in time 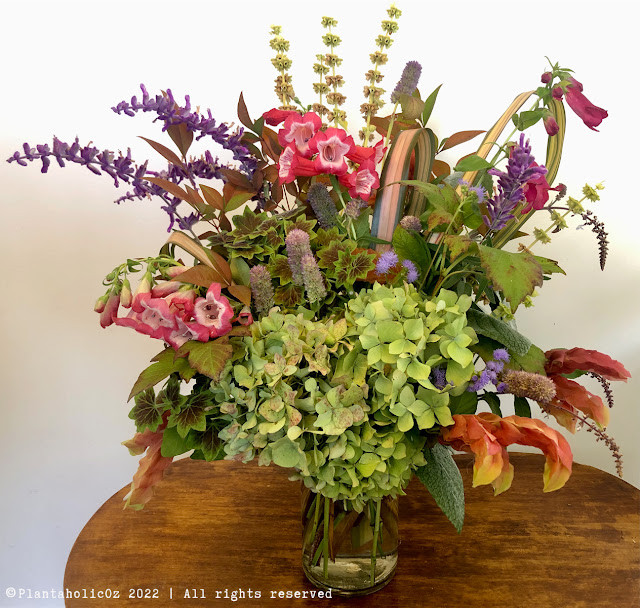 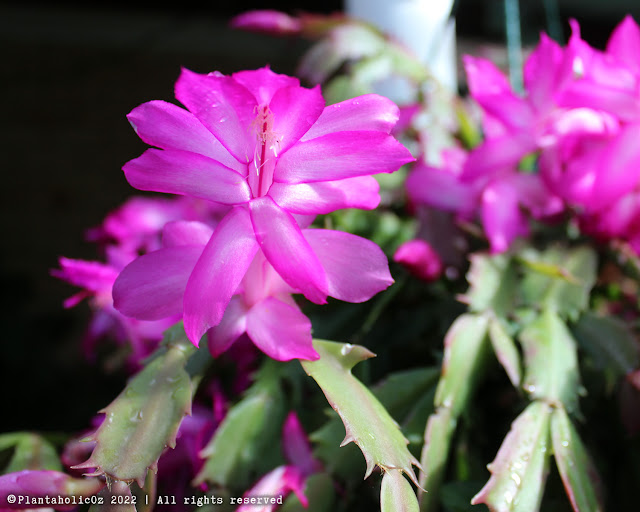 It's late autumn here in South Australia, but in reality, it feels more like winter as our rainy season has well and truly arrived. Though I aim to have a plentiful supply of flowers in my garden throughout the year, this month feels like slim pickings, however I still managed to find a few blooms as I wandered around with my camera recently. The standouts this month are the Schlumbergera sp. With their dazzling colours, they brighten the garden on cold, drizzly days. This one is Schlumbergera 'Millie'. Schlumbergera 'Millie' Schlumbergera 'Millie' with Iresine herbstii below This yellow / buff variety is a favourite for its unusual colouring:  On closer inspection, I noticed something unusual going on....     At first, I though the salmon blooms might sprouting from a separate plant (often several cuttings are placed in the same pot to create a fuller basket for sale). However, on closer inspection, I noticed that both yellow and salmon blooms are growi
Read more